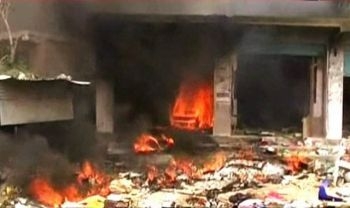 The Polit Bureau of the Communist Party of India (Marxist) has issued the following statement:

The Polit Bureau of the Communist Party of India (Marxist) expresses serious concern over the communal incidents in Kishtwar and other areas of Jammu region. Two people have died and many have suffered injuries in these incidents.

It is unfortunate that even after the trouble began it took several hours for the police and the administration to act. In the meanwhile the rioters had a free run. If the authorities had acted in time, lives and property could have been saved and situation could have been brought under control.

There are reports that activists of the BJP/RSS/VHP are fanning out in the areas and inciting people to attack houses and shops owned by the minority community. This situation is providing grist to the mill of separatist elements in the Kashmir valley who are attempting to create further trouble.

Despite aberrations, the people of the state have maintained communal harmony and brotherhood till now. Attempts to sow discord among the people on religious and communal lines must be defeated. People should not get swayed by rumor mongers and provocations of divisive elements, who are out to disrupt peace in the state.

The Polit Bureau calls upon the state administration to act firmly against elements desperate to disturb peace and harmony in the state.