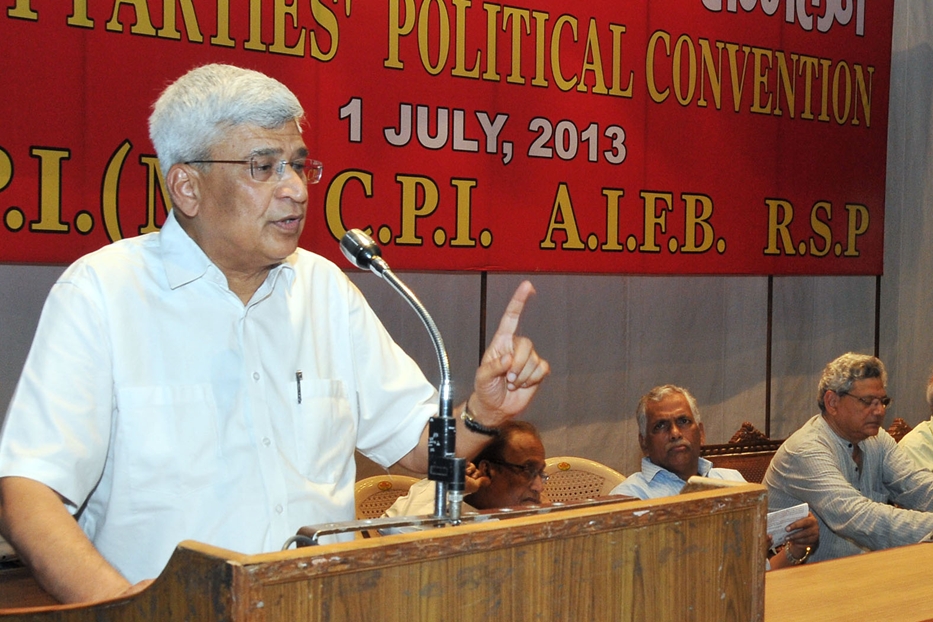 Declaration Placed at the

Sixty six years after independence, the aim of a developed and prosperous India with equal rights for all citizens seems a distant goal.  The current plight of the country is due to the nature of capitalist development which favours the rich and harms the poor.  The government’s policies are determined by the narrow interests of the big business, the rich and the powerful.  As a result, vast masses of the people  still live in poverty, victims of hunger and disease, with no education and health facilities and opportunities to earn a decent livelihood.  India accounts for one-third of the world’s extreme poor.  Dalits, adivasis, women and the minorities continue to be victims of social oppression.  Their social, economic and democratic rights remain severely curtailed.

The politics of the country is dominated by money power. Communal and divisive forces have a free run. More and more young people find no worthwhile employment and face a bleak future.  An independent foreign policy and defence of national sovereignty is  compromised.

Under the rule of the Congress-led UPA government, people suffer from ever increasing  price rise of essential commodities  especially food items; farmers are unable to earn a decent livelihood and there are widespread suicides by farmers; land is being increasingly seized by real estate speculators, mining companies and corporates.  According to the latest survey undertaken by the National Sample Survey Organisation, in the two years between January 2010 and January 2012,  the rate of unemployment rose by a shocking 10.2 per cent;  45 per cent of the children under five years of age are  malnourished;  only 16 per cent of children who enrolled in class-I  managed to reach class-XII; and medicines and health facilities are going beyond the reach of the common people.

The priorities of the Congress-led government are to appease foreign finance capital at the expense of the people.  Foreign supermarket chains are being allowed in retail trade endangering the livelihood of a million shopkeepers and traders.

There is a regression in social values with the invasion of market relations and treating women as sex objects.  Women are growingly subject to sexual attacks and violence and denying them an equal status in society.  Dalits continue to  face atrocities, denial of basic rights and exclusion from productive economic activities.  Adivasis  face an existential threat due to displacement from their land and habitats.  The socio-economic plight of the Muslim minorities was brought out in the Sachar Committee Report but nothing much has been done to redress the situation.  Innocent Muslim youth are often targeted in the name of fighting terrorism.

The Congress-led government has pursued a foreign policy which seeks to align India with the United States of America.  The latest example  being India’s acquiesance  with the rising US-NATO intervention in Syria and the steady reduction of oil supplies from Iran under US pressure.

The policies pursued by the UPA government are inherently anti-people and anti-democratic.  The Congress and the UPA have to be opposed and defeated if alternative policies have to be put in place.

The BJP represents a more regressive variant of the present regime.  The BJP stands for the communal Hindutva ideology which is married to unalloyed free market capitalism. Narendra Modi, the leader projected by the BJP for the next Lok Sabha elections, symbolizes this reactionary mixture.  The Gujarat model touted by Modi symbolizes this path – pogroms for Muslims and bonanza for the corporates.  The praise for Modi sung by the big corporates cannot conceal the plight of the rural poor and the adivasis and the poor human development record in Gujarat.

The BJP which makes much of the corruption of the UPA government is itself tainted with the worst corruption scandals.  Its government in Karnataka became an extension of the mining mafia which looted thousands of crores by illegal mining.

The RSS/BJP combine has also fanned tensions and communal violence in several towns in Uttar Pradesh in the last two years. It is waiting for the opportune moment to push the agenda of the Ram temple in Ayodhya and the scrapping of Article 370 of the Constitution with regard to Jammu & Kashmir.

The BJP is no alternative to the Congress in terms of programme and policies. It has to be fought and isolated. It is the duty of all patriotic, secular and democratic forces to ensure that the BJP does not come back to power.

The politics of the country is being increasingly dominated by money power and business lobbies. Huge amounts of money are being pumped into elections polluting the political system and distorting democracy.  This has to be halted. Electoral reforms to curb money power is an urgent necessity.  The basic reform required is the  introduction of a proportional representation with a partial list system. This will obviate the money and muscle power to a great extent.

The country requires a more federal system.  The concentration of powers and resources in the hands of the Centre should be reduced.  The rights and powers of the states have to be enhanced and backward states should be given a special status  as far as devolution of resources are concerned.  This requires the restructuring of Centre-State relations.

Both the Congress-led UPA and the BJP-led NDA have been beset with contradictions and have shrunk in size.  This has happened since both the major parties stand for policies and programmes which are not in the interests  of the people but represent the interest of a narrow strata.  What is required today is the rejection of the policies and the political platform of the Congress and the BJP.

Alternative economic policies, defence of secularism and social justice, strengthening federalism and an independent foreign policy are all important features of the alternative policy platform.

1)    Implementation of  land reform measures, distribution of  surplus land to the landless, ensuring house sites to each landless household. End to forcible land acquisition. Remunerative prices for farmers and cheap credit based on Swaminathan Commission Report.

2)    Stepping up public investment for infrastructure and setting up manufacturing  and other industries for more employment. Nationalisation of mining and oil resources. Stop disinvestment of public sector shares.

3)    Plug loopholes in taxation measures and ensure collection of legitimate taxes; regulation of speculative financial flows into the country; stop the opening up of financial sector. No FDI in retail trade.

4)    Introduction of  universal public distribution system with 35 kgs of foodgrains at a maximum price of Rs. 2 a kg per month for all families.  Food Security law should be passed to ensure this.

5)    Separation of religion and State as the basic principle of secularism to be embedded in the constitution; firm action to curb communal forces.

9)    Rights of the working classes - enforcement of fair minimum wage and social security measures.  End contractualisation and casualisation of labour.