Memo to Minister -- Save MNREGA 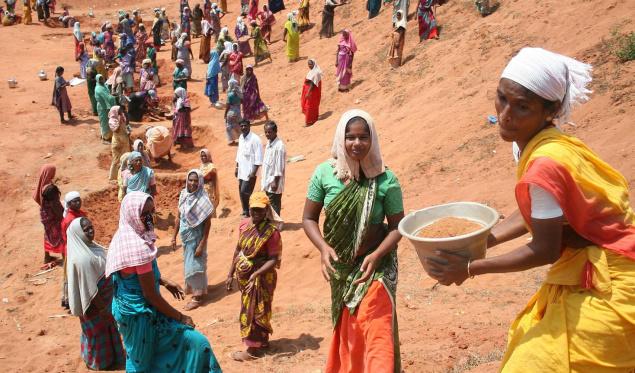 Thursday, November 27, 2014
Press Release
In both the Houses of Parliament today, the issue of “Save MGNREGA, Save the Poor” was raised  and in protest against the Union Government’s refusal to reply to the issues raised by CPI(M) MPs, MPs of Left Parties staged a walkout and joined the dharna at Jantar Mantar. The MPs succeeded in getting the assurance from the Presiding Officers of both the Houses that a separate structured discussion on this issue will be permitted soon.
Shri Sitaram Yechury, Member, Polit Bureau and Leader, CPI(M) Group in Rajya Sabha and P. Karunakaran, Member, Central Committee and Leader, CPI(M) Group in Lok Sabha submitted the following memorandum to Shri Birender Singh, Minister for Rural Development, Government of India.  We are releasing the text of the memorandum for publication.
Dear Shri Birender Singhji,
Today, November 26th, thousands of MGNREGA workers have joined the CPI(M) leadership in a dharna outside Parliament on the slogan of Save MGNREGA, Save the Poor. It is being led by Comrade Manik Sarkar, the Chief Minister of Tripura. His State of Tripura symbolizes the terrible injustice being meted out by the Central Government on the issue of MGNREGA.
As you know for the last several years, Tripura has been the best performing State on MGNREGA in India providing number of workdays that are double the national average. However this year under the NDA Government, the budget allocation for Tripura has been slashed by almost 50 per cent from what is required. As a result the main beneficiaries who comprise tribals, dalits and the rural poor are being very badly affected.
This is part of the general policy of drastically reduced allocations to MGNREGA. Other States are also affected.
Unfortunately some other proposals have been made which are grossly anti-poor. These include moves to restrict MGREGA to 200 backward districts in the name of concentration on integrated participation; change in the present labour material ratio of 60:40 to 51:49; permission for introduction of machines in the name of creation of durable assets, which in turn will facilitate the entry of contractors.
We urge you to reconsider these steps which are very harmful for the interests of the rural poor. We request you not to convert a demand driven law into a quota driven one and  ensure allocations according to the agreed labour budgets of the States. We also request you not to change the present labour material ratio or to restrict the working of the Act to specific districts which is entirely illegal.
We raise these demands as part of our movement to strengthen the right to work.
MNREGA
Memorandum
Parliament