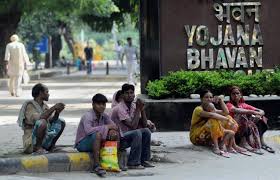 Friday, January 2, 2015
The Polit Bureau of the Communist Party of India (Marxist) has issued the following statement:
The announcement of a NITI Aayog to replace the Planning Commission is a regressive step which will further push the country into a market-driven economy and privatization in all spheres at the expense of diluting even the present inadequate schemes aimed at improving people’s welfare.  Whatever role the Planning Commission had to allocate resources for the public sector and deploying public investment keeping in mind the regional disparities has now ended.
The old Planning Commission was an instrument of the Central Government with the states having no say in the allocation of resources. However, the Modi government's claim that new set-up will be based on cooperative federalism with the states as stake-holders is a spurious one.  The National Development Council is replaced by a Governing Council which is a powerless body of a think-tank.  That think tank will be under the Prime Minister and the Prime Minister's Office. This is a centralized unitarian structure.
Moreover, allocations to the states will be decided by the Finance Ministry, making the states subject to the political whims of the Central government. By saying "one size fits all" cannot work, what is being done is to put the states at the mercy of the Centre to be dealt with arbitrarily without any common principles and norms. This dangerously opens new doors for political bargaining and deal making.
Underlying the abolition of the concept of the Planning Commission, is the Modi government's ideological conviction that public resources should be put at the disposal of the private sector and the market forces. With this the role of the State in ensuring the citizens the fundamental rights and fulfilling the Directive Principles of the Constitution regarding education, health, food security and livelihood, is being abandoned.
Planning Commission
Modi
prime minister
Niti Aayog