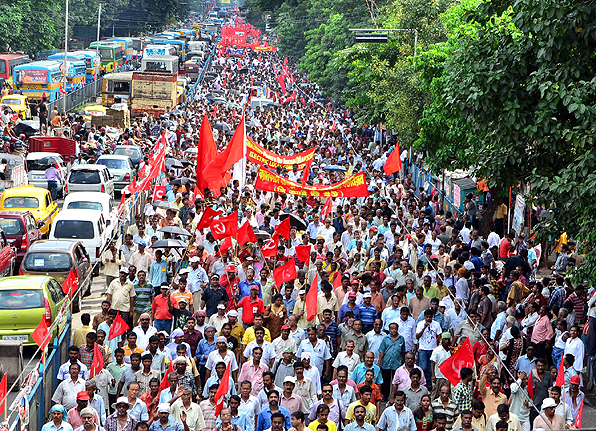 Saturday, January 3, 2015
Press Statement
Six Left parties, the CPI, CPI(M), CPI(ML)-Liberation, AIFB, SUCI(C) and RSP have issued the following statement:
The Modi government and the BJP have unleashed the forces of Hindutva which threatens the secular and democratic values of the Indian Republic. It is at such a juncture that the Government has invited President Obama of the United States of America to be the Chief Guest of the Republic Day on January 26.
It is a supreme irony that the day which symbolizes India’s independence and sovereignty is being graced by the head of a country which has done the most to assault and destroy the sovereignty of many countries around the world. President Obama himself is responsible for the aggression in Libya and for the rerun of bombing and sending troops back to Iraq. The US is doing everything to destroy Syria as a national entity.
The Left parties protest the visit of President Obama because:
1.      The United States is targeting and destabilizing governments and countries in West Asia by military interventions like in Iraq, Libya and Syria.
2.      The United States is the patron and staunch supporter of Israel which occupies Palestinian land and Arab territories and subjects the Palestinian people to colonial oppression.
3.      The United States has shifted a substantial part of its naval and military resources to Asia as part of the pivot of Asia and is creating new military bases and tensions in the Asia-Pacific region.
4.      US intervention in Afghanistan and role in Pakistan have nurtured fundamentalist forces, the disastrous consequences of which serve as a warning to India.
5.      US which wages wars in the name of defending democracy, is facing massive protests at home against racial murders by its police force. Further the terrible record of torture and Islamophobic profiling by the CIA with the approval of the US government has recently exposed the US as amongst the worst violator of human rights and democracy in the world.
The BJP government is pursuing a pro-US foreign policy which is contrary to an independent non-aligned foreign policy. This is being done in the interests of Indian and foreign monopoly capital.
The Left parties strongly protest:
The Left parties call for a Protest Day against the visit of President Obama on January 24.
Halt US aggression
Stop interference in India’s domestic matters
Stop US-India strategic collaboration
Sd/-
Obama
Republic Day
Imperialism
defence
Agreements
Left parties