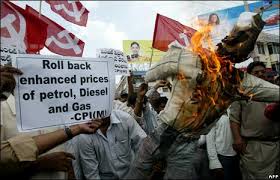 Wednesday, January 22, 2014
January 22, 2014
Press Communiqué
The Polit Bureau of the Communist Party of India (Marxist) met in New Delhi on January 21 and 22, 2014. It has issued the following statement:
Curb Price Rise:
LPG Cylinders
The CPI(M) and the Left parties have been protesting against the exorbitant rise in the price of unsubsidized gas cylinders and the ceiling on subsidized gas cylinders of nine per year. Protests against this price rise were held in various parts of the country. In Kerala alone in 1400 places CPI(M) leaders began indefinite hunger strike from January 15.
As a result, the UPA government has now increased the number of subsidized cylinders per household to twelve per year.
However, the oil companies continue to insist on Aadhar linkage for the supply of subsidized gas cylinders and payment of the full market price for the cylinder on delivery and reimbursement later.
The Polit Bureau demands the scrapping of the Aadhar linkage and the delivery of the twelve cylinders at subsidized rates, as earlier. Aadhar linkage is also illegal in the light of the fact that there is no legal basis for Aadhar identification.
West Bengal
The Polit Bureau expresses serious concern at the number of gang-rapes and crimes against women in West Bengal. This has been exemplified by the horrific double gang rape of a sixteen year old girl at Madhyagram and her subsequent murder. West Bengal has registered the highest number of crimes against women in the country in the years 2011-12.
The Polit Bureau condemned the callous attitude and the failure of the Trinamul Congress government to take swift action against the culprits and effective steps to curb such crimes against women.
The ruling TMC continues with its rampage against democratic rights. All elected bodies and institutions are being subverted. Currently elections are being held to the college unions. Out of the 222 college union elections held so far, in most of them students of organisations opposed to the ruling party’s student organisation were not allowed to file nominations. Only in 36 colleges were they able to do so partially.
The Polit Bureau strongly condemned the murder of Saifuddin Mollah, a 25 year old SFI leader who was brutally beaten to death by TMC goons in Baruipur in South 24 Parganas.
Given the notorious record of the ruling party in rigging elections and preventing voters from casting their votes, the Election Commission should take special measures to ensure a fair and peaceful election.
Kerala
The Special Additional Sessions Court has given its verdict in the T.P. Chandrasekharan murder case. Originally 76 persons were accused in the case. Of these many were discharged in the course of the trial.
Now in the verdict announced, out of the 36 accused, 24 have been acquitted and 12 have been found guilty. Among those acquitted are Party leaders like P. Mohanan, a district Secretariat member of Kozhikode and another area committee secretary. This shows that the charge leveled of conspiracy by Party leaders has been proven to be false.
The Kerala State Committee will take appropriate decision after going through the judgment.
Lok Sabha Election
The Polit Bureau discussed the preparations for the Lok Sabha election. It approved the seats to be contested in a number of states. The PB also heard the report about the talks for electoral understanding with the non-Congress secular parties in certain states.
Central Committee Meeting
The Polit Bureau decided to hold the next meeting of the Central Committee on March 1 & 2, 2014. The election manifesto of the Party will also be finalized in this meeting.
P.B. Communique
January 21
Price Rise
LPG
Aadhar
Lok Sabha elections
West Bengal
Kerala
Madhyagram