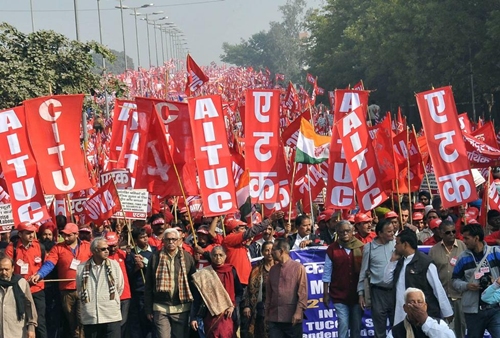 Friday, October 17, 2014
Press Statement
The Polit Bureau of the Communist Party of India (Marxist) has issued the following statement:
Shramev Jayate Karyakram, inaugurated by the Prime Minister yesterday with much fanfare, means nothing much to the working people in the country.
The Universal Account Number for Employees Provident Fund Subscribers facilitating portability  in case of change in employment was being worked out for the last few years.  The present government has just signaled its implementation.
The main aspect of the day’s programme was, what is billed as end to Inspection Raj.  This scheme involves e-filing of returns from employers and putting an end to inspection process of factories and establishments.  It is well-known that despite inspections, many labour laws and social security schemes like EPF and ESI were not being implemented for large chunk of workers.   The new norms will only worsen the situation and encourage further violations by employers.
All these initiatives from the government are, as they themselves have made clear, to ease the investment climate in the country.
The pronouncements on Shramev Jayate have to be seen linked with the labour law amendments already moved by government of India and by state governments in Rajasthan and Madhya Pradesh.  Some more proposals have been announced by government of India, which will amend the definition of small industries removing all establishments with 40 workers out of the purview of 14 very important labour laws.
In the name of Shramev Jayate, the Modi government is acting in the interests of investors and not workers.  It is also condemnable that changes in labour laws and other moves, which affect the workers, are being implemented without even discussions with the trade unions.
The Polit Bureau of the CPI(M) fully supports the protest actions by the Central trade unions and national federations of employees against the anti-worker amendments in labour laws.
Labour Laws
shramev jayate
EPF
workers rights