Sitaram Yechury in the Rajya Sabha 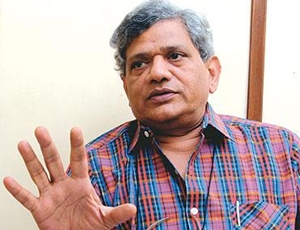 Below are excerpts from the speech delivered by CPI(M) Polit Bureau member and leader of CPI(M) in Rajya Sabha, Sitaram Yechury in the House on April 22, 2013. He was participating in the discussion on ‘Situation Arising out of Atrocities and Social Exploitation of Women and Girl Child in the Country resulting in growing sense of insecurity in the society’.

The CPI(M) staged a walkout when deputy chairman P J Kurien sat on chair during this debate. The CPI(M) is boycotting Kurien, who himself is facing allegation of rape, until his name is cleared or he resigns. Only when Kurien vacated the Chair under the pressure of this protest did Yechury return to the House to make the speech.

WE would not have liked to participate in such a debate with any needle of suspicion on anybody sitting in the chair on a similar case. Therefore, I thank you for creating those circumstances.

But, I rise with a very, very deep sense of anger, anguish and agony because the crimes that are committed against women nowadays have seen a manifold rise; and the gruesomeness of this particular crime, words fail me to actually condemn in the worst possible manner that it should be condemned. I can only recollect four lines that Gurudev Rabindranath Tagore wrote when he returned his Knighthood. I quote,

"Give me a voice of thunder,
that I may hurl imprecations upon this cannibal
whose gruesome hunger
spares neither the mother nor the child."

It is with these words he returned his Knighthood. Today, the entire country will have to hang its head in shame that we are just not able to protect our mothers and children. Why this beastly behaviour against the five year old child? Can you imagine how depraved a society can be? Why is this happening at a time when all of us are considering ourselves to be emerging economy? We pride ourselves being a modern country. We are unleashing the animal spirit, which the prime minister keeps talking of, in this manner. Therefore, it is not surprising while we rub shoulders with high and mighty on the high table of the G-20 Summit, you have The Guardian posing questions. I quote: "Of all the G-20 nations, India has been labelled as the worst place to be a woman. But how is this possible in a country that prides itself as being the world's largest democracy?"

TWO SETS
OF PROBLEMS
There is a survey conducted by Thomson Reuters' TrustLaw Women, a hub of information and support for women's rights. It ranks India with Afghanistan, Congo and Somalia as one of the most dangerous places for women. What is happening is that in every three out of four cases of rape registered, forget the unregistered, even in the capital city of Delhi, the culprits went unpunished between 2002 and 2011. The official statistics by the National Crime Records Bureau reveal that between 2007 and 2011, the incidents of rape increased by 9.7 per cent. I agree with Shivanand Tiwari that it is not only a question of policing that is important but there is something seriously wrong in our society that is getting more and more depraved; and that is something that this august House must contribute to try and correct. Therefore, I will say there are two sets of problems involved. One relates to the structural problems of a functioning democracy that is, our law enforcement and justice delivery systems continue to remain pathetic. Unless you have the fear of law, you can't have respect for law. With your law enforcement and justice delivery system being pathetic as they are today, you can generate neither fear nor respect for law. There is the Law Commission, which way back in 1987 drew up a blueprint to raise the judge-population ratio from 1.05 judges for every lakh population to five judges within five years. What is the status today? Twenty five years later, the ratio is still 1.4 judges per lakh population.

How can you deliver justice? If you cannot deliver justice, law enforcement, crime enforcement cannot work. If justice is not delivered, why would investigations take place? Why would cases be filed? It goes down the line. There is an important point here, which I want the government to consider that this is not only an isolated case of rape, not only a general larger issue of great concern and anguish to all of us, that is sexual assaults against women, but this is also a larger case of the question of law enforcement and justice delivery system in our country. Unless that is improved and attention is paid to that, this situation cannot be remedied.

QUESTION OF
MODERNITY
The second aspect deals with what is our practice of modern democracy. We call ourselves modern. A noted sociologist, Dipankar Gupta, who was my classmate at one point of time, a most noted sociologist in India today, defines modernity. I think it is important that we all realise this. He defines modernity as characterised by an attitude of equality with, and respect for, others. It is not as if in a modern society all are actually equal. Yet, in spite of the many differences that exist among people, modernity demands a baseline similarity so that people can live with dignity and can realistically avail of opportunities to better their conditions of existence. It is on this bedrock of equality that other differences and inequalities can be added on. But the foundational equality cannot be compromised for it is on this that claims of citizenship are made in modern societies. In traditional orders, there were rulers and subjects, but no citizens.

We have a social order where there are still rulers and subjects. There are no citizens. We have a patriarchal order that continues to pervade in our society. I can only describe it by invoking a term of an Iranian intellectual who at the time of Ayatollah Khomeini-led Iranian revolution they were talking of the revolution coming from the west; they said this is a westernization of Iran that is taking place -- coined a term called westoxication, not westernization, but intoxicated with the west. I would like to extend this term modernity which we call ourselves in India; it is not modernity, it is modernoxity. It is intoxication with modern things. We can wear Gucci shoes; we can flaunt Mont Blanc pens, but when you want your daughter to be married, it has to be in the same sub-caste. When you want a choice between a son and a daughter, it is the son who is preferred. That is what is modernoxity. We are a toxic society with modern instruments to play with, but we are not a modern society. And that modern society has to be created. I am amazed. Sometimes, my family wonders why I spend so much time looking at the matrimonial columns. On Sundays, I look at the matrimonial columns only to identify the number of people who are NRIs, whose children have never set their foot on the soil of India, but they will put a column looking for a sub-caste match that they want. What is this? Is it a modern society? What we are creating today is a lethal combination. I would say it is a lethal combination; it is a venal cocktail of the hangover of feudal patriarchy and neo-liberal values of consumerism that we are generating, which Ms Mayawatiji has talked about. It is this lethal combination that is destroying our social values. It is this cocktail that is giving rise to all this that we are seeing today. These economic reforms have generated aspirations; they have generated all sorts of things that are shown in terms of TRP ratings in your television sets. That sort of a commercialisation where women are treated as objects of desire, as objects to be shown, but not as human beings, is what feeds the feudal patriarchal values, which continue to coexist. Unless this is shattered, we cannot really control this situation.

These are not issues on which we would like to give long speeches, but I would only urge this august House and the government to consider that while the system of administration of our democracy in terms of law enforcement and in terms of delivery of justice is vastly improved; while that needs to be done, I think, as a collective body, the Indian Parliament should rise to see to it that this venal cocktail of lethal combination of feudal patriarchy and the consumerist values that today the neo-liberal reforms are creating, is not allowed to grow further.

This is what is happening and unless you are able to identify the subject holistically, you will not be able to solve this problem. After the unfortunate gang rape that happened in December, one may just look at records. The home minister could please provide us the records. The number of instances of rape has increased, not decreased. What have you done? Have you publicised and made it fashionable! How can, after such a national outrage, rate of this sort of a venal crime increases unless the values of neo-liberal consumerism have actually glamourised something like this? Instead of containing that animal spirit, you are unleashing the most deepest depraved animal instinct in our society; it is something which cant be accepted.

SLAY THIS
DANGEROUS ANIMAL
Therefore, I would urge this government to not take up these issues -- one case after another -- in a piecemeal manner and tell us that so many have been arrested and so many have not been arrested. Please do that; please enforce law; please deliver justice. But, at the same time, also understand that in the larger context of the economic reforms that you are following, you are unleashing a new animal in India. This new animal in India is the combination of feudal patriarchy along with your neo-liberal consumerism. That is a very dangerous animal. That is why, I would urge the government to accept the recommendations of Justice Verma Committee; please do whatever is required and needful. I am sure, everybody, cutting across every single political party represented in this House, would support any reform that would be brought about to improve our law enforcement and improve delivery of justice.

We all have to contribute to changing the society. Shivanand Tiwariji quoted a noted writer. Firaq Gorakhpuri; he suddenly comes to my mind. All of us know that he was a professor of English. He belonged to a traditional Hindu upper caste family. Raghupati Sahai was his name. He taught English but he wrote Urdu poetry. That is India. He would be a Hindu, writing in Urdu and teaching English. That is the greatness of our society. Once, there were communal riots going on all around the country. There was a sher-o-shayari taking place in Allahabad. He was there and was not saying anything because he was very depressed. At that time, everybody insisted that he should say something. On their insistence, he said two lines. I just want to repeat those two lines. You know, in sher-o-shayari, it is to do with love, glamour and such things.
“Haasil-e-husn-o-ishq bas itni
Aadmi aadmi ko pehchaane”
That is what we have to create. That is the basis of humanism one individual recognising the other individual as an individual. Unless we have that respect for each other, we cant solve this problem. So, while combining all other requirements of administration, let us collectively try to change the consciousness in our society that is getting degenerated by the day, by this lethal combination that I was talking of. Let us stop this from happening. I think, that is the biggest contribution we can all do to our own country and our society.