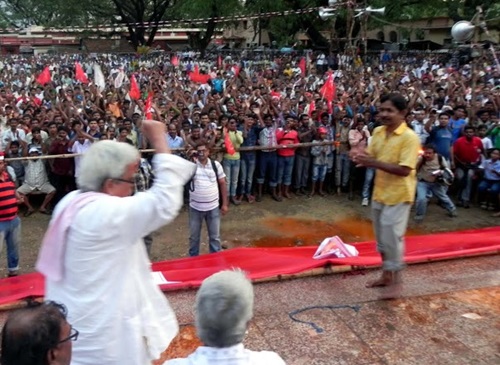 Mamata would have forgotten what she said did 11 years ago but the people of West Bengal will never forget it -  “If you have the courage, tell people the truth. Tell them what you did 11 years back” challenged Biman Basu when he said that Mamata Banerjee signed the Citizenship (Amendment) Bill, 2003 as a member of Vajpayee’s ministry.   This bill was passed by a voice vote in Parliament. According to the bill, whoever immigrated to India after 1971 is considered an infiltrator if he/she doesn’t have valid documents.

Addressing a press conference at Baharampur, Murshidabad, Biman Basu said that in 2003 Modi’s BJP and Mamata Banerjee were both part of the central government. On 18th December 2003, Deputy Prime Minister, L.K. Advani, introduced this bill in the Rajya Sabha. Mamata Banerjee signed that bill which stipulated that refugees should be considered as Bangladeshi infiltrators. Among others, the Left was the most vocal in campaigning against that bill. CPI(M) parliamentarian, Brinda Karat met the Prime Minister, Atal Bihari Vajpayee personally and demanded that the bill be scrapped. General Secretary of CPI(M), Prakash Karat, also wrote to Atal Bihari Vajpayee against the bill.

Now Mamata Banerjee is claiming that there is a secret alliance between the CPI(M), Congress and the BJP. This is ridiculous. It is she who swings between allying with the BJP and the Congress. In the last 3 years, after the Vidhan Sabha elections, Congress and TMC’s unholy alliance killed 190 of our Party supporters and activists. In Murshidabad itself, 23 of our comrades were killed by these two parties.

At a public meeting in support of Pramathesh Mukherjee, Left Front candidate from Bahrampore, Biman Basu said that the EC had finally taken into account complaints about the first few phases of polling. If people were still prevented from voting a bold resistance must be built against this reign of terror. Biman Basu appealed to the people to defeat the unprincipled TMC. He appealed to the people to go to the polling booth in groups and retaliate against TMC goons if they try to stop them. The meeting was presided over by CPI(M) District Committee Secretary, Mrigank Bhattacharjee. RSP leader Kshiti Goswami, Forward Bloc leader Jayanta Roy and CPI leader Haradhan  Das who also addressed the meeting.