Mamata and Modi substitute Each Other: Surjya Kanta Mishra 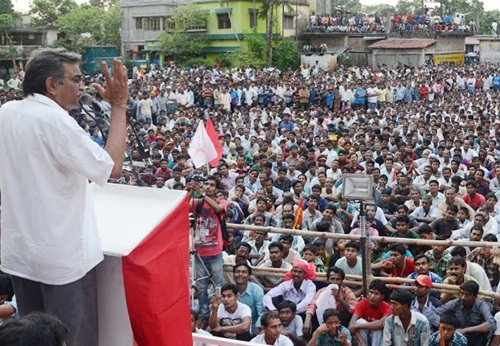 The Left is the only force which waged struggles for the rights of the refugees after partition, said CPI(M) Polit Bureau member, Surjya Kanta Mishra in a public meeting  at Deganga, on the 6th of May. Whereas in 2003, when the NDA government had brought an amendment to the Indian Citizen’s Act, to drive out refugees from the country, Mamata Banerjee had fully supported the move.  But now she is singing a different tune. Mishra further commented that Mamata and Modi seem to be substituting for each other.

This day, Mishra pointed that the ruling TMC is fast losing its popular support. He said that Mamata from the Brigade ground podium had given the call of ‘Delhi Chalo’, before this Lok Sabha election. But she had been in Delhi, holding key ministerial portfolios under different regimes previously. What did she contribute?

Mishra accused Mamata of putting up a shadow play of attacking Modi, to garner support from the Muslims. He asked the people to recollect that Mamata had been part of the BJP run NDA government at the centre in the past.  Did she forget then that the BJP is controlled by the RSS, who were behind the assassination of Gandhi, questioned Surjya Kanta Mishra.  He also mentioned that there is hardly any difference between the economic policies of the BJP and the Congress.

Surjya Kanta Mishra, addressing the gathering, said that the TMC government has failed in acting upon its promises of minority development. One of the promises was to open 10,000 new madrasas, but has it even appointed 10 new madrasa teachers, asked Mishra.

He said that in the 34 years of Left Front rule, the clean, honest character of Jyoti Basu and Buddhadeb Bhattacharya could never be maligned. Under the Left, the state had made many progressive strides. The present government has made the state go bankrupt, with a staggering 17,000 crores rupee as outlying debt.  Mishra expressed full confidence that people of the state would stand in support of the Left, rejecting the anarchy of the TMC government.