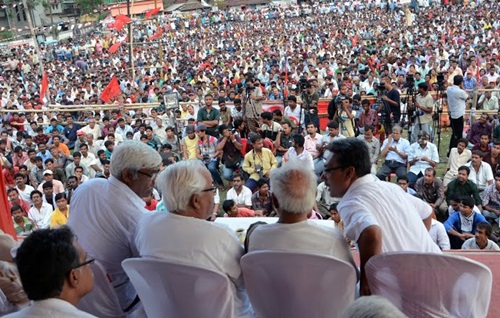 On the 6th of May, in a campaign meeting, held in Jadavpur constituency, CPI (M) Polit Bureau member, Buddhadeb Bhattacharjee, asked the people to issue a notice of caution to the present TMC government against its misrule.

Bhattacharya said that the TMC was a partner to the anti people policies undertaken by the Congress led UPA government.  It cannot be believed that in the future TMC will never ally with BJP. After all when the rest of the country was criticising the role of the Modi government in the Gujarat riots, Mamata congratulated him by sending flowers.  Meanwhile, the BJP prime ministerial candidate has already dropped hints at a future alliance with the TMC, offering ‘laddus’ at one meeting and ‘rasgullas’ in another. Buddhadeb Bhattacharjee asked the people to never trust Mamata.

Bhattacharjee said that in the last three years no new employment has been created in the state, thousands of youth do not have any jobs, pushing them out of West Bengal in search of employment. Government has been borrowing from the money market to spend lavish festivities. When the people of the state are not getting food and jobs the Chief Minister is flying in helicopters. He alleged that Mamata has become the symbol of Sharadha scam.  Gautam Deb and Sujan Chakraborty were harassed by the present government because they raised allegations of money laundering by the TMC leaders.

Buddhadeb Bhattacharjee, commenting on the spate of violence in the previous phases of election, said “We have asked the EC to do their job. What happened to the deployment of central forces in all booths? But we will not sit quiet. We are telling people to be prepared, never to bow down their heads to threat. If people resist, nobody has the courage of stopping them from exercising their right. Peoples’ word is the last word.”

Bhattacharjee criticized both the Congress and the BJP for their anti people policies. He said that the only hope for the poor and working class is the third alternative at the centre.  People have rejected the scam ridden, anti people Congress government. He also cautioned the people of the dangerous and communal BJP, led by Modi. Buddhadeb Bhattacharjee said he believes that the people of West Bengal will reject the BJP.

He presented the idea of the third alternative at the centre, which would work in favour of the poor. It would adopt policies for poor and marginalised, work for land reform, ensure food security and education for all and arrange for minimum wage of Rs. 10,000. Bhattacharya said that he has full faith that the people of the state will help in strengthening the Left forces at the centre.