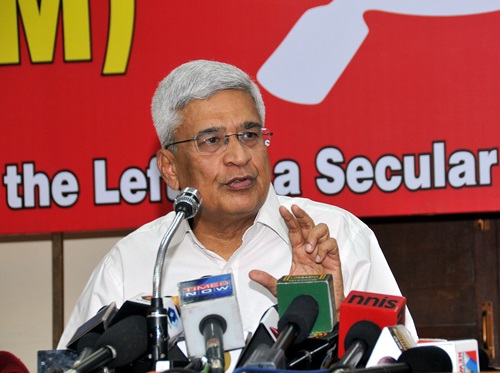 CPI(M) General Secretary Prakash Karat termed the results of the Lok Sabha elections from West Bengal as “distorted”. Addressing the press in New Delhi today, he said that there was widespread rigging and violence during the last three phases of the elections in the state and the entire democratic process was vitiated. “The results do not reflect the strength and support of the people for the Left Front in West Bengal”.

Prakash Karat said that in 32 out of 42 constituencies in the state, there was widespread rigging and violence and these have been widely reported in the Bengali media. But the Election Commission has failed in its duty of ensuring a free and fair poll. “The Left, the Congress and the BJP together had demanded repoll in 3200 booths where rigging was done, but the EC had ordered repoll only in 16 booths. There is something wrong with the election machinery.” He said that during the 2004 and 2009 Lok Sabha elections the Party had raised the issue about the role of observers who are sent to the constituencies. Prakash Karat pointed out that “there is something defective as there are no clear guidelines about how these observers should act”.

Answering a question about the fall in percentage of votes polled by the Party in Bengal, Prakash said that “the percentage of votes does not reflect the correct picture as there was widespread rigging.” He termed the drop of over 11 per cent vote since the last assembly elections as “unacceptable”. This does not reflect the true situation, he said.

Our immediate concern will be taking our Party and the movement ahead in West Bengal, irrespective of the election results, he added.

About the outcome of the elections at the national level, Prakash said though the Party had worked for the rejection of the Congress, it is not happy with the outcome, as the main benefit of the anti-Congress mood has gone to the BJP.

Below is the text of the statement released to the Press by the Polit Bureau of the CPI(M) responding to the verdict of the Lok Sabha Elections 2014:

"The verdict of the people in the 16th Lok Sabha election has been clear and decisive.  There has been an anti-Congress wave which has routed the Congress and the UPA.  The BJP has gained from this anti-Congress wave resulting in a big victory for the BJP and the NDA.  There was an unprecedented use of money power in these elections.

The Polit Bureau of the CPI(M) greets the thousands of cadres and supporters of the CPI(M) and the Left Front in West Bengal who have worked courageously in the face of ceaseless attacks in these elections.  The Party will identify the weaknesses and take steps to overcome them.

The people have voted against the policies of the Congress-led UPA government which resulted in price rise, agrarian distress and corruption.  They voted for a change and for relief from the problems afflicting them.  The CPI(M) will continue to work to defend the interests of the working people and to safeguard the secular democratic framework of the country."

We also take this opportunity to thank our followers and supporters for the encouraging response to our campaign in the Lok Sabha Elections 2014.