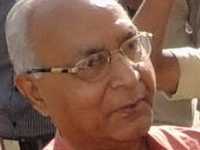 Abul Hasnat Khan is CPI(M) candidate for 8- Maldah South Parliamentary constituency. Abul Hasnat Khan completed his Masters Degree in History. He joined trade union movement and later on the CPI(M) of which he became a full time functionary in 1970. He is a National council member of CITU. He is the vice president of the All India Beedi Workers’ Federation. He also played a vital role in organizing the Beedi Workers’ Welfare Committee in West Bengal. A sports lover, Abul Hasnat Khan was associated with the West Bengal Volleyball Association. He is associated with various sports clubs, libraries and cultural organizations of which he has been the main organizer. He was member of the Court of the Aligarh Muslim University. Abul Hasnat Khan visited Japan on behalf of the CITU in 1995 for taking part in the World Peace Conference on the occasion of the Golden Jubilee of the dropping of Atom Bomb on Hiroshima and Nagasaki. He was a Member of the West Bengal Legislative Assembly from 1977 to 1997. He was elected to the Lok Sabha in 1998 and 1999.