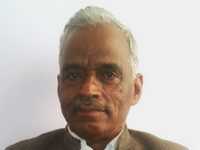 Fifty nine year old Amraram is no newcomer to politics. A four time MLA from the Communist Party of India (Marxist), he is the party’s candidate for the Sikar parliamentary constituency. A central committee member and state committee member as well, Amraram has a BSC, B.Ed and M.Com degree. For some years, he was employed as a teacher, a vocation that he gave up soon and plunged himself in participating and leading major peasant and farmer struggles. He is also the president of the All India Kisan Sabha and also the district president of the AIKS. A former president of the students’ union at S K College, Sikar, Amra Ram has been at the forefront raising issues like cheap electricity for farmers, irrigation facilities, industrial development in the region etc. He led several successful farmer agitations including the Mahapadav in Jaipur where 50,000 farmers laid siege to the secretariat and the courts during the BJP regime. A born fighter and a farmer, like many of his comrades from the State, Amraram’s political career has not been one without struggles.