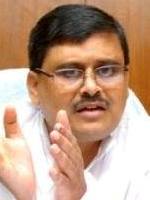 Bangsha Gopal Choudhury is the Left Front nominated CPI(M) candidate for the 40- Asansol Parliamentary constituency. He was elected twice to the Lok Sabha as a member of 14th and 15th Lok Sabha. Now in his mid- fifties, Bangsha Gopal Choudhury, graduated in Economics from the T.D.B. College of Raniganj under Burdwan University. He got the membership of CPI(M) in 1979. Now he is the whole-timer of the Party and the secretariat member of Bardhaman district committee of CPI(M). He was an ardent student activist and was inducted in the Party through the students’ movement. He served as the president of the Bardhaman district committee of SFI. He was a Member of West Bengal Legislative Assembly and a cabinet minister of West Bengal Government during the period 1991- 2005. As Minister for Small-Scale Industries he played pivotal role in the process of empowerment of the rural and urban youth. As Technical Education Minister he initiated new plans for the brighter future of the young generation. As Member of Parliament he served as member in the Standing Committees on Coal & Steel and Industry. He is well known for his skills of debate and oratory. Bangsha Gopal likes to read books. He also has keen interest in sports.