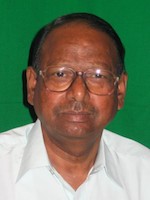 Basudeb Acharia is the CPI(M) candidate for 36- Bankura Parliamentary constituency. He is the sitting MP and has been elected for nine consecutive terms from this constituency. He has been the leader of the CPI(M) group in the Lok Sabha since 2004. Basudeb Acharia is a member of the Central Committee of the CPI(M). From an early age he was involved with the workers movement. He organized workers in various trade unions. Currently, he is the President of West Bengal Railway Contractor Labour Union, LIC Agent organization of India, DVC Contractor Workers’ Union, etc. He is a member of the General Council of the CITU and also the Working Committee of CITU, West Bengal. He has served on a number of Parliamentary committees. He was a member of various Railways committees for 25 years; like Railway Convention Committee, Joint Select Committee on Railways Bill, Consultative Committee for Ministry of Railways etc. Apart from this he has also been on the House Committee, General Purposes Committee, Consultative Committee for Ministry of Industry, Rules Committee, Committee of Privileges , Consultative Committee of Ministry of Heavy Industry & Public Enterprises etc. He has been raising several issues concerning workers rights, peasants etc. inside Parliament. Basudeb Acharia played pivotal role in the expansion of the Railways not only in West Bengal but in Eastern and North- Eastern India.