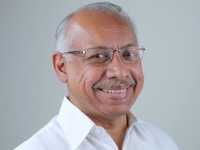 Dr. Christi Fernandez hails from Kollam district of Kerala. He is a first rank holder at graduate and post graduate levels from the erstwhile mother University of Kerala. He was selected to the Indian Administrative Service in 1973 and was allotted to the Gujarat cadre. Worked in several senior positions in the central and State governments. The assignments include that of district collector, Director, Joint secretary, Additional Secretary, Special Secretary, Principal Secretary and Secretary in departments and Ministries like home, agriculture, health, finance, petroleum, industries, urban development, commerce, tourism etc. at different stages of his career. While working as secretary, tourism in government of India, he was appointed as secretary to the President of India. He was on the board of directors of several companies and chairman or chairman cum managing director of central and state public sector enterprises. At present he is on the board of three companies and a member on the court of Jamia Millia University.