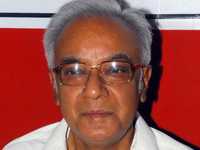 Dr. Asim Kumar Dasgupta is the Left Front nominated CPI(M) candidate for the 16 - Dumdum Parliamentary constituency. He has completed his undergraduate and graduate degrees in Economics from the University of Calcutta. He scored record marks in Masters Degree and secured topper’s position in 1967. Thereafter he completed PhD in Economics from the Massachusetts Institute of Technology of USA in 1975. He was the professor of Economics of the University of Calcutta. Dr. Asim Dasgupta joined CPI(M) in 1980. He was closely associated with students’ politics during his college days. Since then he always took part in the democratic movements and voiced the demands of struggling masses. He is known for his debating skill and oratory. Now, he is 68 years old. Dr. Asim Dasgupta was the MLA of Khardaha constituency for 24 years. He became the Minister of Finance and Excise in the Left Front Government in 1987. He was assigned with the additional responsibility of Development & Planning portfolio. He was in the office till 2011. He also served as the Chairman of State Planning Board. He was the Chairman of the empowered committee set up by the Union Government of the Finance Ministers of all the State Governments since 1999 to 2011. He took leading role in introducing Value Added Tax (VAT) for the states and was instrumental in the most ambitious tax reform in Indian history since independence by introducing the concept of VAT and GST. He served as a member of the Prime Minister’s Economic Advisory Council. Dr. Asim Dasgupta delivered several invited lectures in MIT, Harvard and Barclay Universities on alternative economy and the decentralized development policies of Left Front Government of West Bengal.