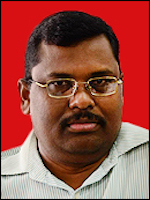 Dr Pulin Behary Baskey, a sitting member of the Lok Sabha, is the Left Front and CPI(M) candidate for the Jhargram (ST) reserved constituency. Dr Baskey, who is in his mid-forties, was born in a very poor tribal family. His father was a marginal farmer. Fighting hard against obstacles, he passed MBBS from Kolkata College. He is a doctor by profession, but among the poor in his area he is better known as a social worker because he never takes fees from them. Having joined the CPI(M) in 1998, he is now a secretariat member of its West Medinipur district committee. Rural development and implementing the three-tier Panchayat system for empowerment of the weaker sections of the society is his principal area of activity. He also played a major role in spreading literacy and in community health building. He has passionately highlighted the issues of tribals in mainstream movements and organized them to fight for their rights. He has also played a pivotal role in the movement to popularize literature in the tribal language and is deeply involved in the cultural movement, especially in promoting and developing tribal culture. Dr Baskey is also an avid sports buff and has inspired the formation of several sports organizations in the tribal belt. As an MP, he took part in several debates and discussions and raised numerous issues related to the toiling masses. He has also been an active contributor in the Committees on Rural Development and Members of Parliament Local Area Development Scheme. He served as Chairman of the Medinipur Zila Parishad during 1998-2002 and of the Paschim Medinipur Zila Parishad during 2002–2008.