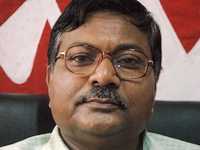 A poor carpenter’s son, Ram Chandra Dome, defeated numerous obstacles to complete his MBBS from N.R.S. Medical College and Hospital, Kolkata. A sitting MP since 1989, Dome is CPI (M)’s candidate nominated by the Left Front for the 41- Bolpur (SC) Parliamentary constituency. He has been elected six consecutive times from Birbhum (SC). In the 15th Lok Sabha, he was elected from the Bolpur (SC) constituency and served as the Chief Whip of CPI(M) in the House. An active parliamentarian, Dome has been part of various delegations to China, Russia and Thailand. He has also contributed in several committees formed by the Central Government. At the state-level, Dome was Chairman of Sriniketan Santiniketan Development Authority, Bolpur as also of the Court of Viswa-Bharati University and Governing Body, Indian Council of Medical Research (ICMR). He has also been associated with Indian Medical Association. Dome’s engagement with people’s movements began when he joined SFI in the 1970s. He later participated in the youth movement and became central committee member of DYFI. He also took part in peasant movements and joined CPI (M) as a whole-timer in 1977. Along with his hectic political work, Dome makes sure he takes out time to continue charitable medical practice for the needy and the weaker sections of the society.