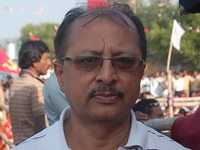 In 2009, an agricultural scientist won the very first “Nirmal” award from the President of India. Meet Professor (Dr) Santanu Jha, former chairperson of Kalyani municipality. An agricultural scientist of international repute, he teaches in Bidhan Chandra Agricultural University, Kalyani. He is also the candidate nominated by the Left Front and the CPI(M) for the 12-Krishnanagar Parliamentary constituency. Coming from a tradition of teaching, his father, the late Subodh Chandra Jha was one of the pioneer figures of the teachers’ movement in West Bengal and a founder leader of the ABTA in Maldah district. Santanu Jha passed his Madhyamik from Kalindri High School and Higher Secondary from Maldah District School and did his graduation and post-graduation Agricultural Science from Bidhan Chandra Agricultural University, completing his PhD as well. Academically well grounded, he has attended conferences in South Africa, China, Thailand including an international workshop in Pakistan and presented research papers in his area of work. In addition to this, he has guided a number of students in their research activities and associated with several Universities, national and foreign. His academic work is impressive. Santanu has already published more than seventy-five research papers in national and international research journals. He has also been involved with some very important research projects. His projects deal with preservation of Mango, Oil-seeds and many other vegetables. His project on the herbal values of Neem in agriculture received academic acclaim. He pioneered steps at international fora so that the patent value of mango be enjoyed by the mango farmers. He played a pivotal role in a project involving the cultivation of vegetables in the wasted land involving the Sabars, the tribal, in West Medinipore. A keen promoter of sports and culture, he essayed a leading role in the making of the Kalyani Stadium. Equally interested in the preparation and maintenance of sports grounds, he had an advisory role in the maintenance of football grounds of all the major football clubs in West Bengal and played special role in the development of the Shillong and Nehru Stadiums. His commitment to culture is also well known. His formed the Kalyani Nattyacha Kendra in his young days displaying his commitment to the non-commercial and progressive group theater movement. The Kendra now enjoys national repute. In addition, he was also the district secretary of the Paschim Banga Bigyan Mancha. As a student leader, he was a Secretariat member of the SFI in Nadia district. At present, Santanu Jha is a member of CPI(M) Nadia District Committee.