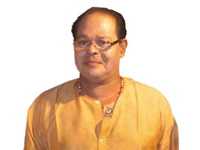 Shri. Innocent is a well known film actor and producer from Kerala. He was born on 28th February 1945 in Irinjalakkuda, Thrissur district. He is one of the most successful and leading comedy actor of Malayalam cinema. Currently he is the president of Association of Malayalam Movie Artists (AMMA) in Kerala. Innocent was elected to Irinjalakkuda Municipal Council and he is also actively involved in pain and palliative care movement. He is known for his secular interventions and his wholehearted involvement in improving cultural values of Kerala. Innocent is contesting to Lok Sabha from Chalakkudy constituency as a CPI(M) backed independent candidate. Shri. Innocent has published his memoirs in a book: Njan Innocent. He has published two other books: Mazha Kannadi (collection of short stories) and Chirrikku Pinnil (an autobiography). Innocent writes columns in magazines and newspapers.