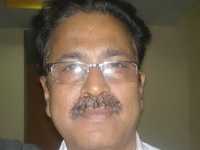 Iswar Chandra Das is the Left Front nominated CPI(M) candidate for the 38– Burdwan East (SC) Parliamentary constituency. He passed Masters Degrees in History and Political Science. Now in his mid-fifties, he has come from schedule class family and belongs to tanner community. Iswar Chandra Das got the membership of CPI(M) in 1981. Now he is the member of Katwa Zonal Committee of CPI(M). He is the leading face of the peasants’ movement. He is the member of the peasants’ council of the Bardhaman district. He was motivated by the Leftist ideology from his student days. He devoted himself to organize students’ under the flag of independence- democracy-socialism. He was member of the Bardhaman district committee of SFI. He also participated in the youths’ movements. He was the vice-president of the Bardhaman district committee of DYFI and also was the state committee member. Iswar Chandra Das is a teacher by profession. He is also a well-known performer. As an actor, he takes part in the theatres and jatras.