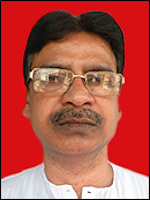 Khagen Murmu is the Left Front nominated CPI (M) candidate for 7- Maldah North Parliamentary constituency. He is the only candidate in this General Election who is contesting from a general seat with a tribal background. He is 54 years of age. Battling with poverty from his childhood Khagen Murmu achieved graduation in Arts. He grew up overcoming the socio-economic hurdles and struggled hard to continue his formal education. He joined the left students’ movement and was an active organizer. He joined the peasants’ movement at a very young age and through a lifetime devotion to the people’s cause has won the love and respect of the poor and underprivileged people. He has always held a strong loyalty to the tribal people he was raised amongst, taking up their issues both in the West Bengal Legislative Assembly and in mass movements, but while he has been a strong voice for the tribal community he has emerged as a leader of the wider mass movements, becoming a district level leader of the CPI (M). Presently he is the secretariat member of CPI (M) Maldah district committee. Khagen Murmu was consecutively elected as a Member of the West Bengal Legislative Assembly in 2006 and 2011. He was elected in the Zila Parishad in the Panchayat elections in 1993 and 1998. He also has served as the vice chairman in Maldah Zila Parishad. He has been a tireless voice of the poor, tribal, marginalized community inside the Assembly. He served as member of Standing Committee on Welfare of Backward Classes and Minorities of the West Bengal Legislative Assembly. He also has served the Committee on Constituency development fund of Assembly as its chairman.