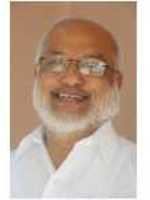 Com. M. A. Baby is contesting from the Kollam Lok Sabha constituency in Kerala. A member of CPI (M) Polit Bureau, Com. Baby is a former member of the Rajya Sabha and was the Minister for Education in the last LDF government in Kerala. He is currently an MLA from an assembly constituency in Kollam. A graduate in Political Science, Com. Baby was an activist of the Kerala Students Federation (KSF) which later on merged with the Students Federation of India when it was formed. He held many responsible positions in the Student Federation of India and the Democratic Youth Federation of India. During the internal Emergency in the country between 1975-77 he was arrested, jailed and tortured. He was elected to the Rajya Sabha at the age of 32 and became one of the youngest members of the house. While serving as minister for Education and Culture in Kerala, Com. Baby brought in drastic changes in the education sector in the state. His reforms were aimed at making the teaching-learning process more balanced. He implemented the single window admission processing for higher secondary education. Despite the opposition of private managements controlled by caste and religious groups, the implementation of single window admission brought in the much needed professionalism and discipline in the admission process in higher secondary education in Kerala. Another notable change was the implementation of grading system in high schools. Com. Baby has authored many books. He is the founder of “ Swaralaya”, a cultural organisation.