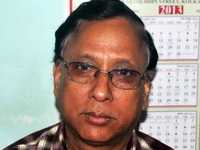 Mahendra Kumar Roy is the Left Front nominated CPI(M) candidate for the 3- Jalpaiguri (SC) Parliamentary constituency. He is in his late fifties and was a member of 15th Lok Sabha. Teacher of a secondary school, Mahendra Kumar Roy, graduated in Arts stream. He also passed the teachers’ training program B.Ed. He has come from a very poor schedule caste family and belongs to Rajbansi community. His father was a farmer. He got the membership of CPI(M) in 1978. Presently he is the member of CPI(M) Jalpaiguri district committee. He became an activist of SFI since his school days. Later he involved himself with the youth’s movement and joined DYFI. He also took part in the peasants’ movements. He is also a prominent face in the teachers’ movement and an important organizer of the All Bengal Teachers’ Association. He is also associated with the West Bengal Democratic Writers’ and Artists’ Association. He was member of the Gram Panchayat almost for a decade since 1978, member of Panchayat Samiti for the period of 1987-1992, and member of Jalpaiguri Zila Parishad for the period of 1992–1997. In this period he tried to involve more and more people in the activities of the village local governance. He was elected to the West Bengal Legislative Assembly in 2006. After that he was elected to the Lok Sabha in 2009. As a Member of the West Bengal Legislative Assembly he served as member in the Privilege Committee and the Standing Committee on Irrigation & Water ways. As a Member of Parliament he contributed as a member in the Standing Committees of Labour and Papers Laid on the Table. He participated in the sports and cultural activities since his childhood. He also took pivotal role in shaping up quite a few socio-cultural organizations. He has special interest in watching films, drama and travelling.