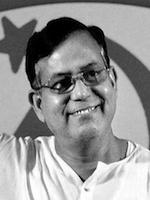 Mohammed Salim is the CPI(M) candidate for 5- Raigunj Parliamentary constituency. He was elected to the 14th Lok Sabha (2004-2009) and Rajya Sabha for two consecutive terms from 1990 to 2001. Presently he is a member of the Central Committee of the CPI(M) and also a Secretariat member West Bengal State Committee of the Party. He graduated in Philosophy from Maulana Azad College of Kolkata. He completed Masters in Philosophy from Jadavpur University. He also pursued Law from the Calcutta University College of Law. He was elected General Secretary of the student's union of his college. He was also elected as the cultural Secretary of Jadavpur University Arts Faculty Students’ Union. In the due course of time he became associated with the youth movement and was elected the Joint Secretary of the West Bengal State Committee of the DYFI in 1987. He served as the General Secretary of DYFI during 1991-2001. He was Founder Secretary of Democratic Forum for National Integration in 1987. He was elected to the West Bengal Legislative Assembly in 2001 and was a minister for Youth Affairs in the Left Front Government. He was on the West Bengal Minorities Development & Finance Corporation (WBMDFC), West Bengal Khadi & Village Industries Board. He was member of Consultative Committee of Union Finance Ministry, Joint Parliamentary Committee on Waqf and Enquiry Committees to probe misconduct of MPs, such as the Cash-for-Votes scam and Cash-for-Questions scam. He also served as member of the Press Council of India. Salim has been relentless taking up development activities for the Muslims and minority communities. He Co-founded the Badshah Khan Higher Secondary (Urdu Medium) School and Najrul Centenary (Bengali Medium) School. As President of Calcutta Muslim Orphanage he established AK Fazlul Haque (English Medium) School and Maulana Abdul Hassan (English Medium) Orphanage School. He also oversaw significant developments in facilities and capacities of the Calcutta Muslim Orphanage. He was a Member of Court of the Aligarh Muslim University and the Jawaharlal Nehru University. As Minister of Youth Affairs in the West Bengal State Cabinet he started and successfully implemented the WBKVIV (self employment generation) program under which rural unemployed youth were imparted vocational training and skill development to help them on the path to self-employment and financial independence. As Chairman of Committee on Urban Development he fought for developmental projects such as the East-West Metro, Tram track concretization, Vivekananda Flyover, Parama Island two-tier roadway etc. Being the Chairman of WBMDFC he was a pioneer in introducing Scholarship schemes for students in professional courses such as Medical, Engineering, and Nursing etc. Under his leadership, WBMDFC remained pioneers in implementing schemes for minorities and the highest performing minority corporation in India for a decade till 2011.