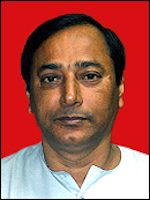 Muzaffar Hossain is the CPI(M) candidate from Jangipur Parliamentary constituency. He is 62 years of age. Presently he is a member of the West Bengal State Committee of the CPI(M). He graduated in Philosophy from Baharampur Krishnanath College in Murshidabad. He was associated with the Bengal Provincial Students Federation in 1966 while he was in school. Later he joined SFI and became vice-president of its Murshidabad District Committee. Subsequently he was elected to the West Bengal State Committee of the DYFI. He also associated himself with the peasants’ movements Com. Muzaffar Hossain dedicated himself in the cause of the toiling people after joining the CPI(M) and becoming a full time functionary. He relentlessly tried to bring the indigenous form of art and culture into the mainstream. He led the movement to resist the post-colonial attack on such cultural forms. To uphold the ideology of the Party among the tribal and folk communities he played key role. He organizes creative forms like drama, folk dance and folk song with the tribal and folk artists. He is a frequent contributor in the Party organ and other progressive publications. He is a recipient of several awards for cultivating folk culture. In 1978 he was elected as the Chairman of the Nabagram Panchayat Samiti.