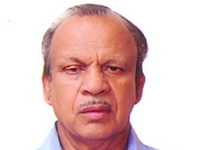 This is the third time Com. P. Karunakaran is contesting as CPI(M) candidate from Kasargod constituency after his victory with a thumping majority in 2004. Com. Karunakaran, is a leader of the masses who could conquer the minds of people by his very simple life. A leader with nearly five decades of experience in the socio political scenario of Kerala, he is currently a member of the CPI(M) Central Committee. He was also the deputy parliamentary party leader of CPI(M) in 15th Lok Sabha. Com. Karunakaran started his public life as an activist of Students' Federation. He was one of the founder leaders of Kerala State Youth Federation, which later became DYFI. He played a pivotal role in organizing the Estate labourers. Com. Karunakaran became president of the China clay Workers Union and later District President of CITU in Kannur. He also was a member of CITU National General Council. Com. Karunakaran became Area secretary of CPI(M) in Nileswaram in 1964. On formation of Kasargod district in the year 1984, he became the District Secretary of CPI(M) and he continued in that position till 1991. During 1991 – 2005 he took charge as General Manager of Deshabimani daily. Com. Karunakaran was brutally manhandled by Police several times while participating in struggles. During Emergency period there was a warrant against him under the draconian MISA. He went underground and continued with Party work. That time he was bitten by a snake and was in a critical condition for nearly five months. Com. Karunakaran was elected to the state Legislative Assembly in 1977 and in 1980 from Thrikkaripur constituency. During his decade old membership in Lok Sabha he actively participated in parliamentary and developmental activities. He was a member of many Parliamentary committees. Born to Shri. Koran and Smt. Chirutha in Kinanur, Com. Karunakaran is married Com. Laila , daughter of veteran CPI(M) leader Com. A.K. Gopalan and Com. Susheela Gopalan. The couple have a daughter named Madhavi.