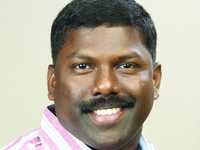 Com. P. K. Biju is contesting as a CPI(M) candidate from Alathur Lok Sabha constituency for the second time. During the 2009 elections Com. Biju was elected with a reasonably good majority against his Congress opponent. Com. Biju is a post graduate in Chemistry from Mahatma Gandhi University and currently he is doing his doctoral research in polymer chemistry. He started his public life as a student union leader through SFI and later he became the State General Secretary and President of SFI. Com. Biju later became the all India President of SFI. Com. Biju’s developmental interventions in his constituency during his first tenure (2009 – 2014) were well appreciated. Althaur is still underdeveloped and his initiatives triggered a lot of developmental projects for the upliftment of the rural poor. His interventions in Parliament were also well received by the public and media. Com. Biju held many academic positions in senate and academic council of M G University and currently he is a member of JNU Court. As a Member of Parliament, Com. Biju is a member of many Standing Committees including that of Ministry of Human Resources Development.