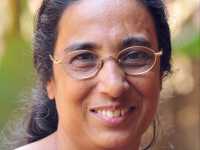 Com.PK Sainaba is a known leader of the masses in their fights for basic rights and against atrocities to women. Amember of CPI (M) Kerala State Committee and the National Vice President of All India Democratic Women Organization, she has participated in struggles to protect the rights of women. Com. Sainaba joined CPI (M) in 1983 while she was working at the state owned company RAIDCO. She was elected to Nilambur Block Panchayath and later she was appointed as a member of the Kerala State Women’s Commission. Com. Sainaba was born to Shri. Hassan and Smt. Unnikkav in an orthodox Muslim family and had education in Maithra Govt. LP School, Edavanna High School and MES College Mambad. She is married to Bashir Chungathara, State Committee Member of Kerala State Electricity Board officers Association.