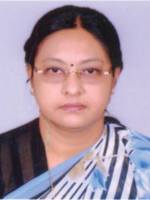 A post-graduate in Modern History from University of Calcutta, CPI(M) candidate Rupa Bagchi is a familiar face in the fight against real estate mafia in Kolkata, leading several slum development movements and initiatives in North and North- Eastern part of the city. Rupa, who is the Left Front candidate from 24-Kolkata North Parliamentary constituency, is a known face in the struggle for empowerment of slum dwellers and urban poor of Kolkata. At present, she holds the office of the leader of opposition in the Kolkata Municipal Corporation, in which she has been a Councillor since 2000. In 2006, Rupa was also elected in the West Bengal Assembly. A member of CPI (M)’s Kolkata district committee, she is also the secretary of Maniktala Zonal Committee of CPI (M). Rupa has been active in students’ movement since her college days. In 1984, she was elected as General Secretary of the students’ union in Vidyasagar College for Women. Later, she was elected as president of the central standing committee of the Students’ Unions of University of Calcutta. Rupa, who was a state committee member of Students Federation of India, went on to contribute to the democratic movement and became central executive committee member of Democratic Youth Federation of India. She has also completed her Bachelor’s in Education (higher secondary level teachers’ training) from University of Calcutta. At present, she is one of the leading members of the All India Democratic Women's Association (AIDWA) in West Bengal.