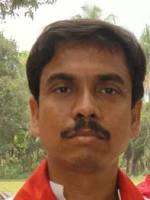 Sabiruddin Mollah is the Left Front nominated CPI(M) candidate for the 26- Uluberia Parliamentary constituency. He is only 39 years of age. Sabiruddin Mollah completed graduation in Science stream from the University of Calcutta in 1997. He actively organized the student community under the flag of independence- democracy – socialism. He led the students’ movement during his college days. Gradually he also took part in the youth movement. Presently he is member of the West Bengal State Committee of DYFI. He got the membership of CPI(M) in 1995. Sabiruddin Mollah is the CPI(M) councilor in Uluberia Municipality. He also holds the office of the leader of the opposition in Uluberia Municipality. Sabiruddin is also known for his talent in sports. He was a skillful footballer and played in the super division level in Uluberia.