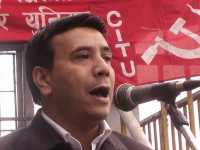 Saman Pathak is the Left Front nominated CPI (M) candidate for Darjeeling Parliamentary constituency. 48-year old Pathak was a member of the Rajya Sabha from 2006 to 2012. He graduated in Arts from the North Bengal University, and completed a postgraduate diploma in Computer Education. Saman is the son of Ananda Pathak, the veteran CPI (M) leader of North Bengal. He was attracted towards left ideology from his student days. He participated in the students’ movement and became the member of the All India executive of SFI. He gallantly fought against the separatist agitations during his student days. As an activist of SFI he mobilized students and youths to maintain harmonious relation. He was attacked several times by the separatist hooligans but he never retreated. Subsequently he became associated with the youth movement. As secretary of the Darjeeling district committee of CITU, he is the leading face of workers’ movement in the state. He has played a pivotal role in organizing the marginalized tea-garden workers of North Bengal and voiced their demands in the upper house of the Parliament as a Member.