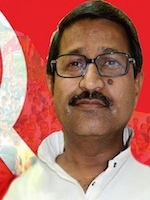 The Left Front supported CPI(M) candidate for Tripura West (General) parliamentary constituency is 58 year old Comrade Shankar Prasad Dutta, a member of CPI(M) Tripura state committee since 2012 and the present General Secretary of CITU Tripura state committee. He got involved in student politics in late 1960s and joined the Tripura state Students’ Federation in 1968. After the formation of SFI, he became one of its important leaders. In 1989 he was elected state secretary of SFI and was also elected to the all India secretariat of SFI. An MA in political science from Marathwara University and LLB from Dr. Ambedkar Law College, he never practiced law, instead becoming a whole timer of CPI(M) in 1982. After leaving SFI in 1992, he served as one of the state secretariat members of DYFI till 1995 though, by then, he had also started actively working for the working class movement. Starting his involvement in trade union movement in Din Mazdoor Union (day labourers union), he has also worked as president of Tripura Auto Rickshaw Workers’ Union and Tripura It Bhatta Workers Union (brick kiln workers). Comrade Dutta has been elected 9 times as secretary of CITU state committee before getting elected the state general secretary in 2013. He is also one of the members of CITU all India working committee. Comrade Dutta faced brutal attacks several times during the 1988-92 Congress-TUJS regime. He was one of 75 leaders, including Comrade Manik Sarkar, whom the Congress goons tried to burn alive by setting on fire the CPI(M) Sadar DC office during that period. He was elected to the state assembly in 2008 from Barjala constituency, however in 2013 lost to the then PCC president Sudip Ray Barman from Agartala seat by a narrow margin of 2600 votes. His wife Comrade Krishna Rakshit is also a member of the CPI(M) state committee and working president of AIDWA state committee.

Tripura West-Key Issues
Tripura West: In tune with the tradition of the seat, people of Tripura West constituency seem all set to repose their faith in CPI(M). Consisting of 30 assembly constituencies spread over the West, Sepahijala, and parts of Gomati and South Tripura district, this parliamentary seat has sent Communist candidates to the parliament 11 times in the last 16 elections held for this seat. Initially CPI and then CPI(M) candidates have won from here in 1952, 1962, 1971,1980, 1984,1996, 1998, 1999, 2002 (bye election),2004 and 2009. Stalwarts like Biren Dutta, Badal Choudhury and Samar Choudhury have represented this seat. From 2002 the seat was represented by Tripura Left Front convener Khagen Das. The performance of the MP is also worth mentioning. According to the figures of state planning and co ordination department, in the financial years 2010-11, 2011-12 and 2012-13 11.71crores of rupees out of the12 crores sanctioned under MP Lad has been spent in different welfare schemes. The seat became a matter of national attention in 1991 when the whole polling procedure was rigged unprecedentedly, CPI(M) had to withdraw its candidate Manik Sarkar. The number of ballots polled for INC candidate Santosh Mohan Deb outnumbered even the total number of electorates. But since 1996, CPI(M) has never lost this seat. In the 2009 election CPI(M) got 60.14% votes cast in this seat and got more votes in all the 30 assembly segments than the closest rival candidate of Congress INPT combine.