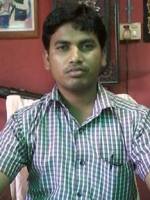 At the age of 26, Sk. Ibrahim Ali is the youngest Left Front-nominated CPI(M) candidate for the 30-Tamluk Parliamentary constituency. A mason’s son, Ibrahim has been struggling hard to overcome economic hurdles to finish his graduation in Bengali from Panskura Banamali College. He has keen interest in sports and is a good sportsman. A party whole-timer since 2011, Ibrahim has been a local committee member of CPI(M) Panskura North since 2012. In the 2013 panchayat elections, 25-year-old Ibrahim defeated the reign of terror unleashed by Trinamool Congress and was elected as a Gram Panchayat member of Gobindapur. He is now a team leader of that gram panchayat. Since his college days, Ibrahim has been active in student politics and was elected General Secretary of the students’ union in Panskura Banamali College. He was also elected in the Court and Council of Vidyasagar University. As a student leader, Ibrahim has shouldered many organisational responsibilities as Secretary of the Panskura zonal committee of SFI in 2007, a secretariat member of SFI East Medinipur district in 2008 and as SFI president of East Medinipur district committee in 2009. He has been a state secretariat member of SFI West Bengal since 2010. At present, he is also discharging his responsibilities in the youth movement and is a member of DYFI’s East Medinipur district committee.