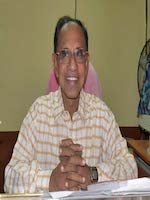 Professor Sk. Saidul Haque is the Left Front nominated CPI(M) candidate for the 39– Burdwan-Durgapur Parliamentary constituency. He was an elected member of the 15th Lok Sabha. He did M.A. in English from the Burdwan Raj College under Burdwan University. He has also passed B.Ed. and DELT. He started his professional career as a teacher of a Higher Secondary school. Then he got selected for teaching in college. Presently he teaches in Burdwan Raj College, one of the leading colleges not only in the district but in the entire state. Sk. Saidul Haque got the membership of CPI(M) in 1977. Now he is the member of Bardhaman district committee of CPI(M). He served as the Chairman of Bardhaman District Primary Education Council of West Bengal for almost a decade. He also worked as vice-chairman of Galsi Panchayat Samiti under Bardhaman district for a decade. He is also a leading face in the literacy movement and a leading organizer of Bardhaman District Committee of Bangio Sakharata Prasar Samiti, the well-known organization in literacy movement. He also is a prominent face in the college & university teachers’ movements. He was secretary of the managing committee of a Secondary school and also was member of the governing bodies of two renowned colleges of Bardhaman. As a Member of Parliament he served as the member in the Standing Committee on Commerce, Consultative Committee on Minority Affairs and House Committee. Sk. Saidul Haque is also known for his cultural affinities. He frequently writes articles on the various important socio-cultural issues. He also writes poems and short stories He has authored a popular book in Bengali titled Moulabad Muslim Janamanas (Fundamentalism and Muslim Population). He is one of the founder members of a local village library. He also loves to watch plays.