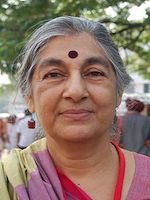 Subhasini Ali is the Left Front nominated CPI(M) candidate for the 15- Barrackpur Parliamentary constituency. She is the daughter of Colonel Prem Sehgal and Captain Lakshmi Sehgal who were a part of the Indian National Army. She attended Welham Girls High School. Later she completed Masters in English. Subhasini Ali joined CPI(M) in1969 and became whole-timer of the Party. She is presently a member of the Central Committee of CPI(M). She is an ardent Trade Union activist and also an important national leader of the All India Democratic Women's Association. She was elected to the Lok Sabha in 1989 from Kanpur constituency. In Kanpur she is popular as Kanpur ki beti (daughter of Kanpur). From the early days of her political career she stood by the causes for the toiling millions. She also became associated with the fight for women's emancipation and empowerment. Her affluent background could not make any hindrance in her deep-rooted connection with the common people and gradually she has become leader of the working class movements. Subhasini Ali came within the Party through trade union movements. She regularly writes articles in different political journals and progressive publications. Her skill of oratory is known in all corners of the country. She has very close association with the women movements of West Bengal. Subhasini Ali has deep rooted cultural affinities. She is fond of Group Theatres. She has also contributed in film industry. By passion she is a costume designer. She has designed costumes in various classic films. As an amateur actor she also appeared in few films. She was formerly married to filmmaker Muzaffar Ali. Her son Shaad Ali, a film maker, has directed number of popular films.