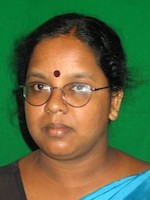 Susmita Bauri is the Left Front nominated CPI(M) candidate for the 37-Bishnupur (SC) Parliamentary constituency. She was elected both in the 14th and 15th Lok Sabha in 2004 and 2009 respectively. She comes from schedule caste background and belongs to the Bauri community. Susmita, an Advocate by profession, passed LL.B. from Hazra Law College under University of Calcutta. But instead of using her expertise in juridical science for mere professional uplift, she provides free legal aid to poor people, especially illiterate women. Susmita joined CPI(M) in 2004. Now she is 39 years old. Her mother Sandhya Bauri also represented this constituency for three times in Lok Sabha. Being the Member of Parliament she also contributed in the Committee on Social Justice and Empowerment, the Standing Committee on Energy, the Committee on Chemicals & Fertilizers and the Committee on Absence of Members from Sitting of the House. Her other areas of interest moves around Horticulture, listening to music and reading books. She also has keen interest in sports like kabaddi and badminton.