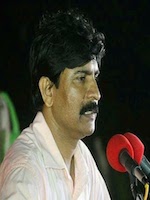 Tapas Sinha is the Left Front nominated CPI(M) candidate for the 31-Kanthi Parliamentary constituency. He is 55 years of age. He was born in a little village in Narayangarh block of undivided Medinipur district. He has completed higher secondary from Narayangarh High School and graduated from Kharagpur College under Vidyasagar University. He became associated with the students’ movements from his school days. Gradually he became an active organizer of SFI. He served as the Secretary of SFI district committee of undivided Medinipur. He associated himself with youth movements in the due course of time and became President of DYFI district committee of undivided Medinipur. Later he served as the General Secretary of the central committee of DYFI for twelve years. Tapas Sinha has been deeply involved with sports and cultural activities since his student life. He possessed natural abilities to organize students and youth communities. He has received several awards for taking part in cultural fields like recitation, drama etc. He became national champion in yoga and has affiliation for national level coaching. He regularly contributes articles on socio-political issues since his college life. He has also authored some books like CHINA- the Leaping Dragon, Satya Samaj aur Siksha (in Hindi), Swapner Deshe (in Bengali) etc. He took special initiative to popularize voluntary blood donation movement when he was the youth organizer. He joined CPI(M) and became the whole-timer of the Party. Presently he is the member of the West Bengal state committee of CPI(M). He has also been involved with the peasants’ movements. He is discharging responsibilities as member of the West Bengal state committee and central council of the All India Kisan Sabha. He was the member of the relief committee which visited Lebanon and Palestine after the bombing by the imperialist forces. Apart from that he represented India in World Federation of Democratic Youth and visited Venezuela, France, Italy, UK, Russia, China, Vietnam etc. He also discharged responsibilities as the Asia Pacific regional coordinator of World Federation of Democratic Youth.