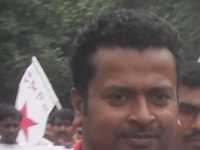 Tirthankar Roy is the Left Front nominated CPI(M) candidate for the 27- Sreerampur Parliamentary constituency. He is only 39 years of age. Tirthankar is a graduate with an additional diploma in computer hardware. He got the membership of CPI(M) in 2008. Now he is a whole-timer of the Party. Tirthankar was born and brought up in a political environment. His grandfather Dinen Bhattacharjee was a Member of Parliament from Sreerampur constituency and moreover he was the leading personality of workers’ movement. Tirthankar was motivated by the Leftist ideology from his student days. He devoted himself to organize students’ under the flag of independence- democracy-socialism. He was the general secretary of the Students’ Union of Sreerampur College. He also discharged organizational responsibilities as the joint secretary of the Hoogly district committee of SFI. Later he took part in the youth movement. He became the secretariat member of the Hoogly district committee of DYFI. He is now holding the office of the general secretary of the Hoogly district committee of DYFI since 2012. He is also the secretariat member of the West Bengal state committee of DYFI. Tirthankar is closely involved with several socio-cultural organizations. He also involves himself with the public libraries. He was also a good footballer in the Sreerampur sub-division and district level in his college days.