To Protect and Defend Agriculture, Farmers and Workers 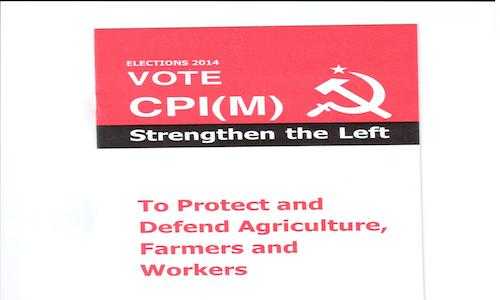 India cannot progress by leaving its farmers and agricultural labourers behind. In the last twenty years, the policies of Congress-led UPA and BJP-led NDA have pushed peasant agriculture into a deep crisis.

The Congress-led UPA and BJP-led NDA Policy in Agriculture Stands For:

Under the Congress-led UPA and its predecessor BJP-led NDA the subsidies to agriculture have been drastically cut and our Farmers have to compete with Farmers in Europe, USA and other parts of the World who are getting huge subsidies as below.

These policies have pushed millions of small and marginal farmers into acute distress and indebtedness, forcing many to commit suicide. Lies and myths propagated by the ruling classes need to be countered with the untold truths and reality on the ground.

Livelihood and Well-Being of Peasantry

The Government claims farmers have benefitted through its policies.

The Government claims it has ensured massive increase in credit to farmers.

In sharp contrast, the Debt Relief Commission set up under the LDF Government in Kerala waived the debts of thousands of peasants in the most transparent and inclusive manner. the proactive policies of the LDF Government in Kerala almost ended farmer’s suicides, primarily because its confidence building measures instilled hope amidst the peasantry.

The Left front Government of West Bengal still holds the best record for land distribution in the entire country. In fact after the TMC Government took over many peasants are being dispossessed of their land. The West Bengal Left front Government had also ensured the registration of tenants, a first in the entire country. Now under TMC tenants are being forcibly removed. It was the LDF Government in Kerala which enacted a legislation to prevent conversion of paddy land and wetland to prevent indiscriminate land use change. It is only the Left and the CPI(M) which is committed to land reform and distribution.

The Government Claims that Public investment in agriculture has risen.

The Government claims the MNREGS has transformed rural livelihoods and huge allocations are being made for its implementation and for Rural Infrastructure Development.

Trade Liberalisation and Corporatisation of Agriculture

Both BJP and Congress are committed to these anti-farmer policies.

The CPI(M) among other issues stands for land reforms and for distribution of land to the landless. It is strongly opposed to land grab by corporates giving a pittance as compensation.

The CPI((M) stands for implementation of the Swaminathan Commission recommendations for an MSP which guarantees profit margins of at least 50 per cent over and above the costs of cultivation for farmers. It stands for a strong procurement policy. A Price Stabilization Fund for crops affected by volatile world market prices and dumping must be ensured.

The CPIM) is opposed to Free Trade Agreements which compromise the interests of our farmers.

The CPI(M) stands for a massive increase in funds for agricultural develoment, rural infrastructure with the aim of developing agriculture, enhancing the incomes of farmers and to increase the purchasing power of the rural poor.

The CPI(M) proposes Social security measures and employment opportunities for the agricultural workers of at least 200 days in a year under the MNREGS and higher wages of at least Rs.300/day must be ensured.